"This plan is worse than the ones that have come before it, if that's possible."
-- Todd True, an attorney with Earthjustice. 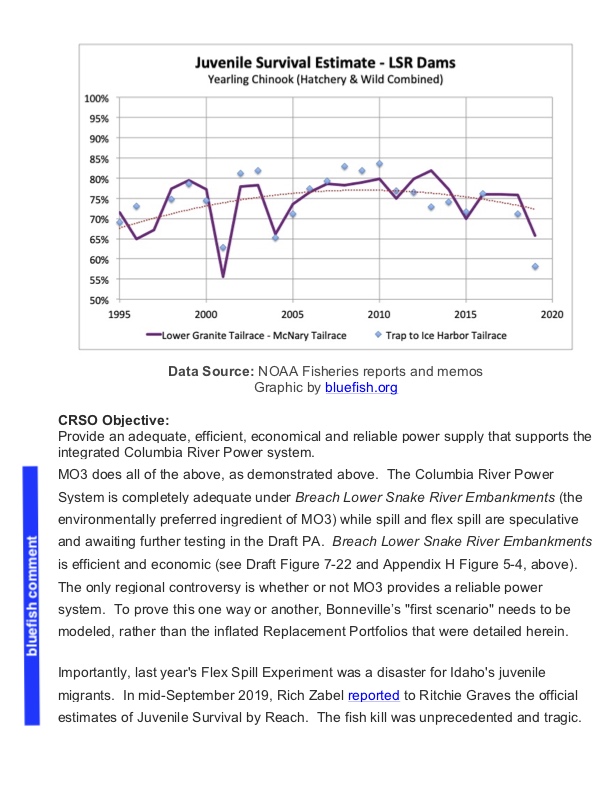 The fight over salmon and dams on the Columbia and Snake rivers could be headed back to the courtroom. Conservation and fishing groups say the federal government's newest plans to manage dams and protect salmon is inadequate. Now, they're ready to sue.

This could be the sixth time federal hydropower plans for the Columbia and Snake River dams end up in court. Each previous trial, federal judges have sent the plans back for revision.

"This plan is worse than the ones that have come before it, if that's possible," said Todd True, an attorney with Earthjustice.

Conservation and fishing groups have given dam managers 60 days to change their plans. If not, the lawsuit moves forward.

The U.S. Army Corps of Engineers and the U.S. Bureau of Reclamation operate 14 federal dams in the Columbia River System Operations. Spokesperson Matt Rabe said the Corps doesn't comment on anticipated litigation. But, he said, talks about managing the dams didn't end with the posted Record of Decision, which is the formal plan selected from the environmental impact statement.

"The agencies recognize the call for additional collaborative dialogue about the future of salmon recovery, affordable and reliable clean electricity, and economic and cultural vitality for the tribes and other communities who depend on the Columbia River System. The Corps does not believe that continued court actions are productive to continuing this dialogue," Rabe said in an emailed statement.

U.S. District Court Judge Michael Simon in 2016 ordered dam managers to consider removing or altering the four Lower Snake River dams. The new plan says that's the best option for fish - but too expensive in terms of irrigation, transportation and power generation. It keeps the controversial dams in place.

"(The environmental impact statement) just recycled past analysis," True said. "The agencies didn't really make a serious effort at trying to figure out how we could meet those other needs."

He said tributary habitat restoration is "less specific" than in previous versions.

The plan also extends a flexible spill agreement for another year. The agreement has been in place at eight dams on the Columbia and Snake rivers since 2019. Flexible spill gives managers the ability to control how much water is released to help young, migrating salmon.

The Bonneville Power Administration, which markets and sells wholesale hydropower, says more water is spilled across the tops of dams at "certain times of the day" when juvenile fish are migrating out to sea. When more power is needed on the grid, water can be moved through dam turbines to generate electricity.

The collaborative approach was originally meant to avoid litigation until a decision was posted about the Columbia River System hydropower operations. Some fish advocates have called increased spill a "stopgap measure" that won't solve long-term problems.

True said the additional year of flexible spill in the latest plan isn't enough to save salmon.

"It's a 15-year biological opinion. They've made no commitment to exactly what spill operations will happen after year one. ... The point is: How can you evaluate whether a 15-year plan is adequate when you only know what's going to happen in the first year?" True said.

As the path to the courtroom nears, fish advocates are asking Northwest governors and members of Congress to help. Removing or altering the dams would take an act of Congress.

"It's very apparent that the federal agencies have failed and just don't have the ability to come forward with a plan that will work. So, we need another branch of government to step in and meet the needs of the region and the people and the salmon," True said.

During a Washington lieutenant governor debate Thursday, both Democratic candidates said they want to work with tribes on better ways to protect salmon.

"As we go forward, I think it's important that we do a much better job with our friends in Indian Country," U.S. Rep. Denny Heck, from Olympia, said.

Washington Sen. Marko Liias, a from Lynnwood, said he toured the Snake River in the fall of 2019, including a visit with the Nez Perce Tribe. Moving forward, he said, there needs to be government-to-government discussions.

"We need to make sure that the decisions we make are guided by science - what's going to have the best impact for the whole ecosystem," Liias said.

A spokesperson for the newly formed Northwest Tribal Salmon Alliance has called the agencies' plan insufficient.

"It doesn't even come close to meeting salmon restoration goals of states in the Northwest and the communities that depend on those salmon," said Don Sampson in an earlier interview after the record of decision was posted.

Sampson said the alliance is building a coalition of Northwest tribes, which all depend on salmon, to restore salmon and a free-flowing Lower Snake River.

"The oversight of the federal courts has been critical to ensure that our agencies and political leaders commit to salmon recovery in the Columbia Basin," said Tom France, regional executive director of the National Wildlife Federation.

U.S. Rep. Dan Newhouse, a Republican from the Yakima Valley, has pushed to keep the dams in place, attending Save Our Dams rallies and hosting panels on the fate of the dams in the Tri-Cities. In a written statement, he said he would continue to support the river system.

"It is disappointing - but not at all surprising - to see the same litigious special interest groups attacking this Administration's robust, transparent, science-based environmental review of the Columbia River system, just as they did with the Obama Administration's previous review," Newhouse said.

"It is likely that removing or reducing hydroelectric generation will require fossil fuel replacements, leading to more greenhouse gases," Miller said. "As a result, reducing carbon-free hydroelectricity is a step in the wrong direction for salmon recovery."

Courtney Flatt covers environmental and natural resource issues for Northwest Public Broadcasting. She is based in Washington's Tri-Cities.
The Fight Over Snake River Dams is Likely Going Back to Court
Oregon Public Broadcasting, October 26, 2020
See what you can learn